Describing the journey of a transaction from client to Core.

A transaction is an atomic change in the state of the blockchain. The simplest form transfers value from address A to B, incorporating a fee for the processing. Transactions are bundled into a block. At that moment they are committed to the blockchain and become irreversible.

All valid transactions are submitted as payload data via the Public REST API and are immutable once added to the blockchain (i.e., included in blocks). While the implementation specifics will depend on the platform used to submit the transaction, SXP's extensive SDK coverage ensures that developers experience a unified workflow across languages and platforms.

In the next sections we will look into the transaction lifecycle from creation to final inclusion in the blocks.

Transaction journey from client To blockchain¶

Core will accept a valid transaction, signed with a valid signature from a private key. Make sure you invoke the SDK builder's sign method on your transaction object using the sender's private key. 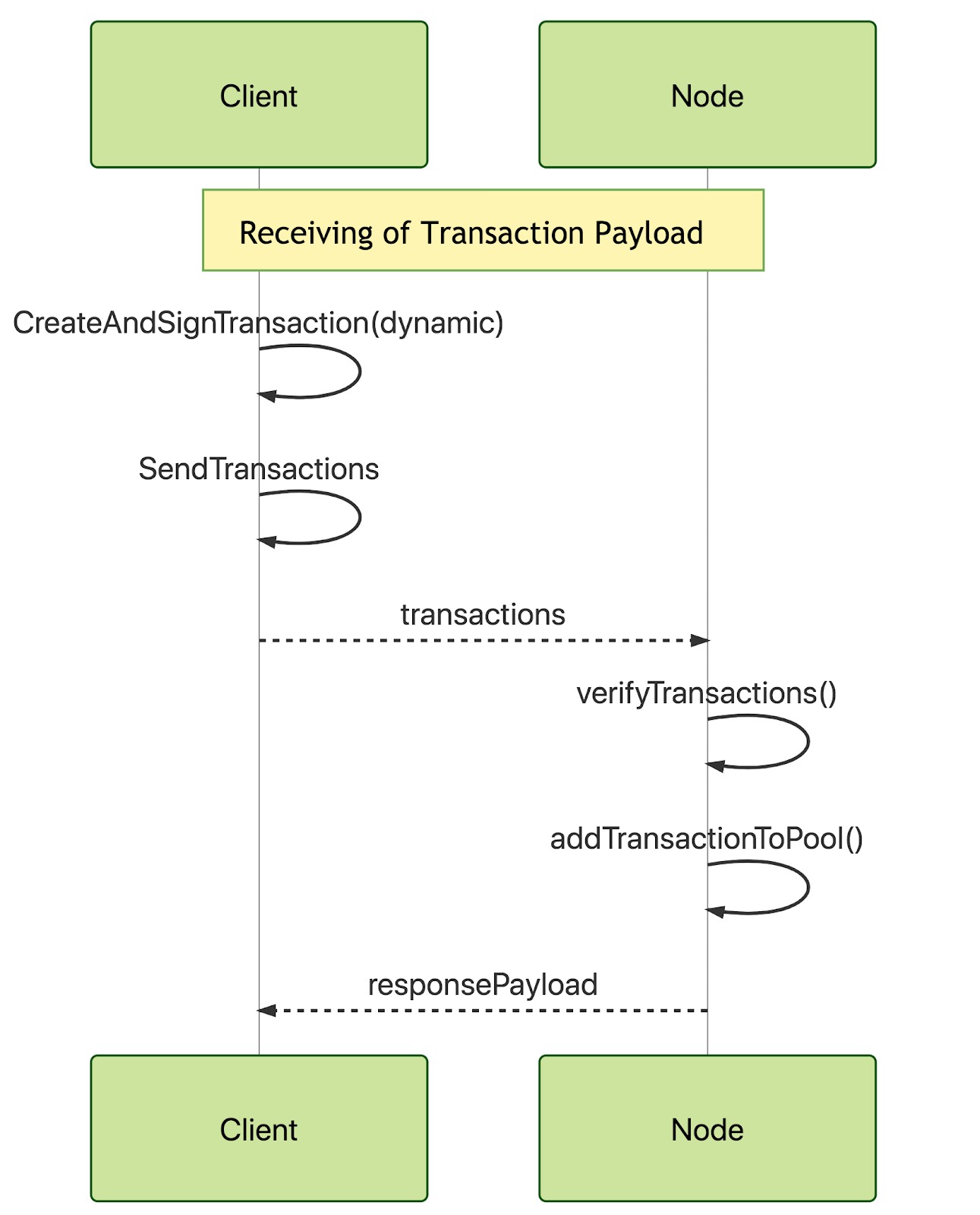 2. Receive and validate transaction on a server running Core¶

All Client SDKs already create API requests to conform to this standard so will typically result in your transaction passing validation.

Notably, no blockchain-level validation occurs at this earliest stage in the transaction lifecycle. Request validation ensures that your POST request can be understood by the network, not that the data it contains represents a valid transaction. This task falls to the next class to handle transaction requests: the TransactionProcessor from Core's pool package.

Assuming validation is successful, the posted transactions are processed by the request handler, which passes the data to the TransactionProcessor for validation.

All transactions submitted to the TransactionProcessor are returned in one of four arrays:

Internally, the TransactionProcessor processes transactions in its validate method by separating:

Transactions move out of the pool once a forging delegate (block producer) is ready and eligible to forge it. At the moment of forging, transactions in the forger's pool are grouped into a potential block and passed to the delegate's forge method for inclusion in a block.

Inside the forge method, all transaction values, fees, and IDs within the block are added together. The values and fees are used to calculate block metadata, while the hashed IDs are concatenated and used as the block's payloadHash property.

With this information in hand, the block data and sorted transactions are passed to the crypto library's Block.create method alongside the forging delegate's keys.

A block is a collection of transactions, but also it is the incremental unit of the blockchain. Every eight seconds, an active delegate produces a new block by bundling a bunch of transactions, verifying each transaction, and signing the block.

Blocks hold quite a lot of metadata on the SXP blockchain, like:

The Block.create method uses the following algorithm to create a new block:

With the forged block successfully returned to the forger library, the only remaining responsibility is to let the network know about the new block - block propagation.

The forged block is relayed to peers via the peer-to-peer protocol.